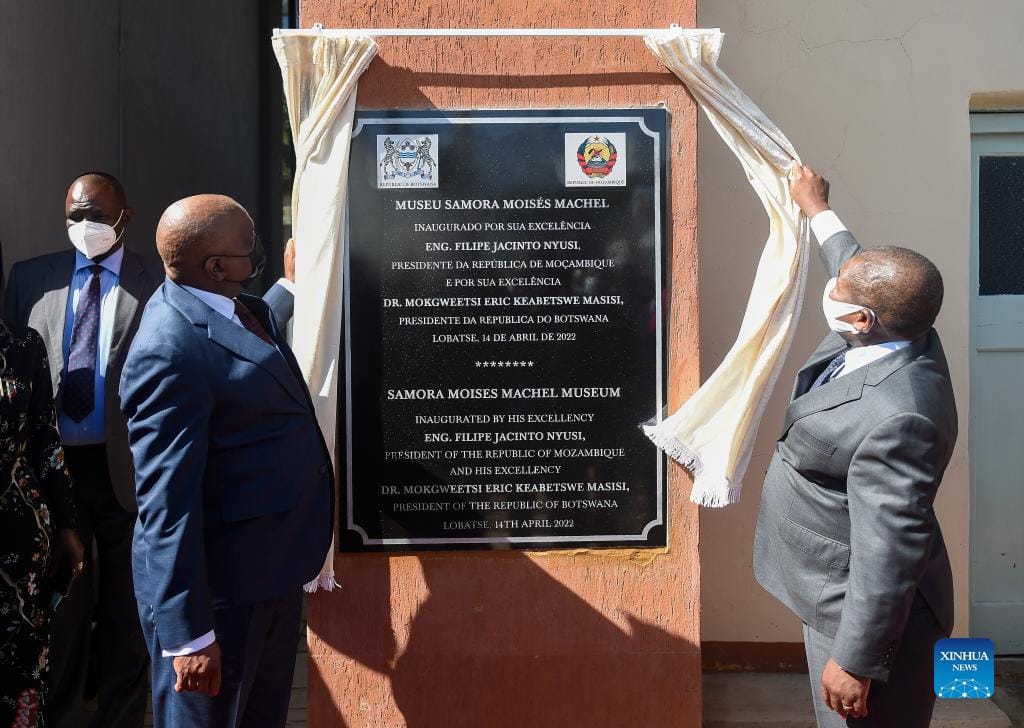 His Excellency Dr. Mokgweetsi Eric Keabetswe Masisi, President of the Republic of Botswana and His Excellency Mr. Filipe Jacinto Nyusi this officially opened the Samora Machel Museum in Lobatse, Botswana.

The Museum in Lobatse is located 70 km away from the southeast of Gaborone, Botswana, on April 14, 2022 the governments of Botswana and Mozambique opened the museum of the late revolutionary leader of the Mozambican liberation movement and Mozambique’s first president Samora Moises Machel in Botswana.

“The museum bears testimony to the two countries long-standing historical ties, premised on our struggles against political and cultural bondage and the upholding of shared values and principles of democracy, as well as familial connections,”said President Mokgweetsi Masisi at the commissioning of the Samora Machel Museum in Lobatse, the Botswanan capital. Masisi said the museum was built by both countries to honor the spirit of the great liberation icon in Machel, saying it is a living monument from which the succeeding generations in the two nations will learn of the indefatigable will to claim fundamental human rights and just pursuit for freedom from cruel and degrading treatment and oppression by other human beings.

In his remarks the visiting President Filipe Jacinto Nyusi of Mozambique said the museum also serves as a reminder of the contributions of many patriots from Botswana and Mozambique, as well as the celebration of the memory of the greatest freedom fighters and statesmen from the entire region.

“We are gratefull for the ultimate sacrfices, including the fountain of blood that continues to nourish the tree that bears the fruits of freedom bestowed upon our part of the world,” said Nyusi, adding that freedom fighters, who laid the foundation for the liberation of southern Africa, must be celebrated.

The museum is expected to become a unique tourist attraction to locals and those from abroad, according to Botswana’s Minister of Environment, Natural Resources Conversation and Tourism Philda Kereng.

Born on Sept. 29, 1933 in Chilembene in the Gaza Province of Mozambique, Machel, a Mozambican revolutionary leader and military commander who led the Mozambican people in their struggle for independence from Portugal in 1975, died on 19 October 1986 in a plane crash.