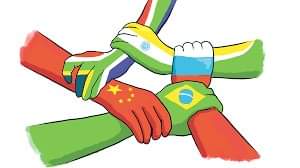 In recent years, BRICS countries, namely Brazil, Russia, India, China and South Africa, have maintained sound momentum of economic and trade cooperation. With the growth rate of exports among them exceeding the global average, BRICS countries have made important contributions to promoting global economic recovery and high-quality development.

The emerging-market bloc, whose gross domestic product (GDP), trade in goods and foreign capital intake accounts for 23 percent, 18 percent and 25 percent, respectively, of the world’s total, has become an important force that cannot be ignored in the world economy.

In November 2020, the five BRICS countries adopted the Strategy for BRICS Economic Partnership 2025, which specified three key spheres of cooperation, including trade, investment and finance, digital economy, and sustainable development, and goals for cooperation in each sphere, charting a new development path for deepening BRICS economic partnership in the next five years.

As the BRICS chair for 2022, China will host the 14th BRICS Summit and other activities.

Since the beginning of the BRICS “China Year”, the five BRICS countries have held more than 60 important events in key areas such as global governance, epidemic prevention and control, digital economy, sustainable development and people-to-people and cultural exchanges, and achieved many positive results.