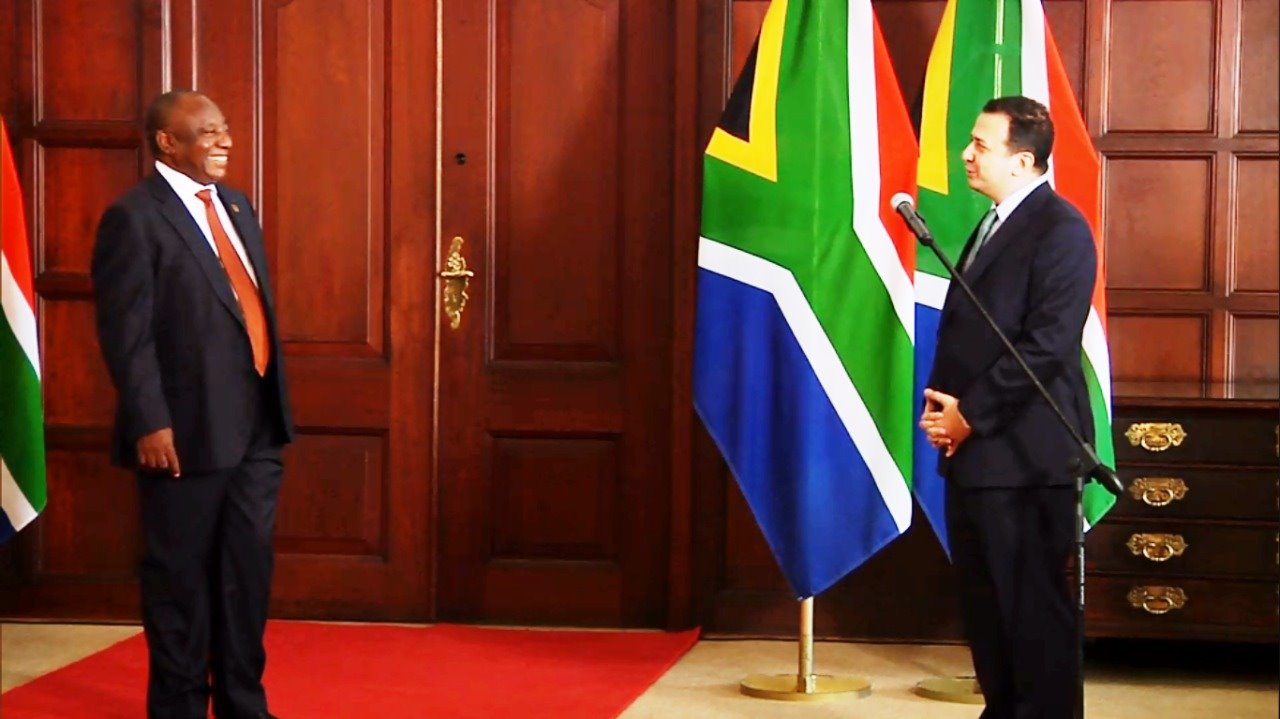 EGYPT’S NEW AMBASSADOR TO SOUTH AFRICA HAS A BOLD CONTINENTAL VISION TO BOLSTER TIES BETWEEN THE TWO COUNTRIES.

Ambassador Ahmed El Fadly, Egypt’s new Ambassador to the Republic of South Africa, presented his Letter of Credence to President Cyril Ramaphosa, along with sixteen Ambassadors and High Commissioners at a ceremony organized on November 19th, at the Union Building.
A seasoned career diplomat, and an avid learner, with over two decades of professional experience under his belt, primarily in the field of regional and international security, El Fadly served in the Embassies of Egypt in Washington D.C. and Vienna, and was most recently, the Director of Disarmament Affairs and Peaceful Uses of Nuclear Energy. El Fadly also served as the Deputy Chief of Egypt’s Mission in Addis Ababa, Ethiopia, where he prides himself on his extensive experience in dealing with African affairs, having headed the delegation of Egypt partaking in the AU Peace and Security Mission to Darfur in 2017, and his membership of Egyptian delegations to several AU Summits, Ministerial Meetings and Peace and Security Council Meetings.

“The history of the longstanding bilateral relationship between Egypt and South Africa dates back to the 1940s. After it had fully gained its own independence through its Revolution of 1952, Egypt became a staunch supporter of the freedom and independence of its African brothers and sisters. Accordingly, to support this end and in protest of the discriminatory policies of the apartheid regime, Egypt broke diplomatic ties with the government of South Africa and hosted an office of the African National Congress (ANC), providing all the necessary means of support for its success in liberating South Africa. In fact, the late Alfred Nzo, the first Foreign Minister of post-apartheid South Africa, previously headed that office in Cairo in the 1960s”, explained El Fadly. “It is no secret that the late President Gamal Abdel-Nasser played a pivotal role in securing all kinds of support for South Africa’s march towards freedom, along with its icons and leaders, especially to Madiba; the legendary late President Nelson Mandela, who is also a popular and highly respected figure in Egypt to this day”, El Fadly added.

For his tenure as Ambassador, El Fadly hopes to expand and deepen the scope of cooperation between Egypt and South Africa, beyond the current levels which already permeate both societies, reaching up to the presidential level. A firm believer in the notion that “African problems require African solutions, whereby Africa remains for Africans”, El Fadly elaborated that he “envisions an inclusive economic development and growth in Africa, led by both Egypt and South Africa, which can best be achieved by furthering their strategic relationship”. El Fadly asserts that the Cairo-Cape Road is a case in point; a project that has the potential of transforming what was once a colonial endeavor into a bridge, bonding both ends of the African continent, thereby bringing about a continental Renaissance by promoting trade, investment and tourism, as well as bringing Africans closer together. “It is true that there is much to be done and much that can be done, but in the words of Madiba himself ‘it always seems impossible until it it’s done’. In this case, I am quite confident that fruitful cooperation between Egypt and South Africa can truly launch the entire continent forward” added El Fadly.
El Fadly also intends to further promote relations between the two countries beyond the political and economic spheres. “In addition to the importance of our common African cultural heritage, Egyptian and South African peoples love football”, explained El Fadly. In this respect, El Fadly asserts that the most recent assumption of Pitso Mosimane’s duties as coach of the iconic Al-Ahly Club in Cairo means that he is reassured of the support of 60 million Egyptians who root for the club, especially in light of his successes there thus far. “Likewise, I hope that through my work serving both of our beloved countries, I will earn the trust and support of 60 million South Africans” added El Fadly.