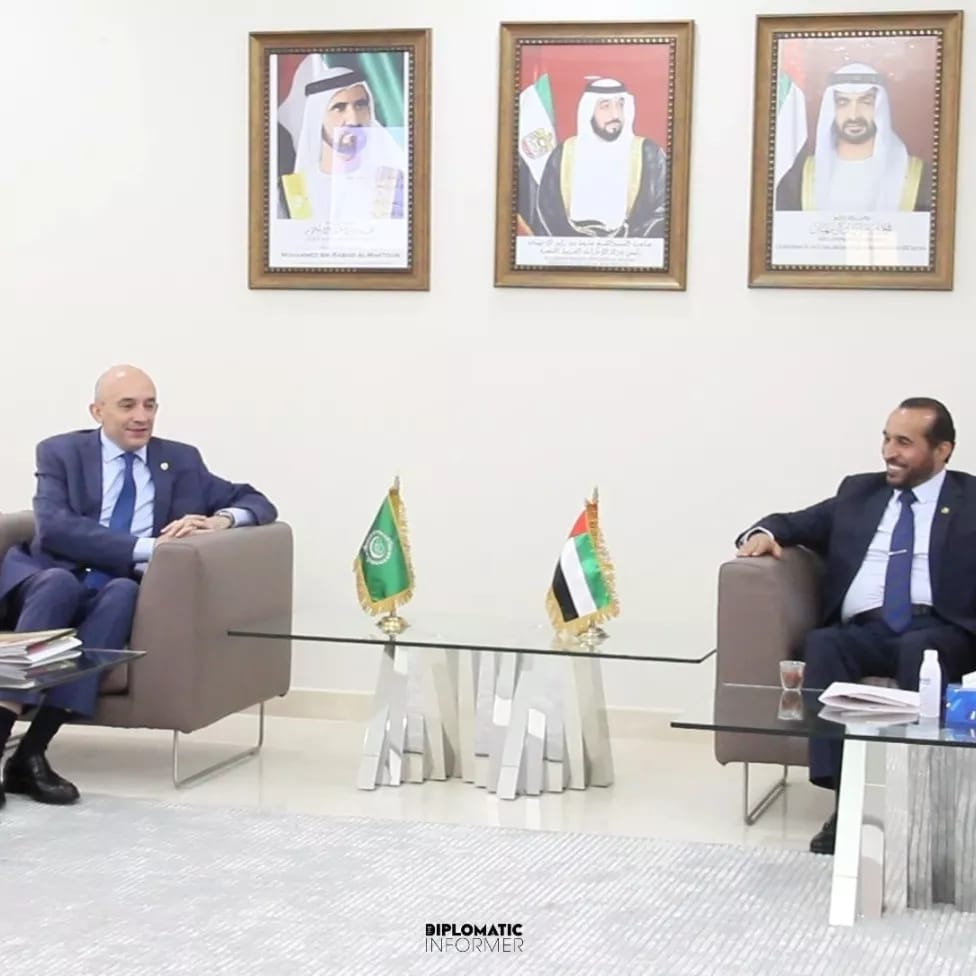 During the meeting Ambassador Mahash Alhameli & Ambassador Mohamedoun Daddah, discussed issues of mutual interest, the relations and cooperation between the UAE Embassy and the Arab League mission.

The United Arab Emirates and South Africa have maintained a friendly and mutual beneficial relationship since formal diplomatic ties were first established in 1994.  The relationship has a strong economic focus.

The UAE is South Africa’s main importing partner in the Gulf Cooperation Council (GCC) and is a lucrative export market for South African products, while many South African companies are benefitting from opportunities in the UAE in a variety of sectors.

South African construction, hospitality, consultancy and services sectors are playing a big role in the rapid development of the UAE and it is estimated that more than 100 South African companies operate in the UAE, while others maintain representative offices in the UAE.

South Africa expatriate community in the UAE, estimated to be between 60,000 and 80,000, are active in various sectors.  Many are in the teaching and health professions, military industry as well as aviation.

Since the dawn of South Africa’s democracy in 1994 regular Presidential visits have taken place, with the latest visit being that of President Cyril Ramaphosa in July 2018.  These high-level visits are a clear indication of the importance attached to the SA-UAE relationship.

Following the conclusion of an Agreement for the establishment of a Joint Ministerial Commission in 2011, the first meeting of the SA-UAE Joint Commission was held in August 2015 in Abu Dhabi.  A second session of the Joint Commission took place in October 2018 in Pretoria.

South Africa and the UAE signed a number of important bilateral agreements, with a few more agreements and MoU’s nearing finalisation.   Some of the notable concluded agreements are :

Protocol on the Establishment of Diplomatic Relations

Memorandum of Understanding on Police Cooperation

Agreement on the Establishment of a Joint Commission for Bilateral

Memorandum of Understanding on Political Consultations

Agreement on the Avoidance of Double Taxation and the Prevention of

Fiscal Evasion with respect to Taxes on Income

Memorandum of Understanding on Cooperation in the Field of Social Development.

The excellent bilateral relationship between UAE and South Africa is also reflected in a strong collaboration in multilateral fora and international organisations, where the two countries have a like-minded approach to many global challenges.

Speaking to the Diplomatic Informer Magazine SA, His Excellency Ambassador Mohamedoun Daddah said “The Agreement between Arab League & South Africa was signed in 2008 and the Mission opened 2009″.

The League’s main goal is to “draw closer the relations between member states and co-ordinate collaboration between them, to safeguard theiindependence and sovereignty, and to consider in a general way the affairs and interests of the Arab countries.”

The Arab League was Founded in March 1945, the League of Arab States (or Arab League) is a loose confederation of twenty-two Arab nations whose broad mission is to improve coordination among its members on matters of common interest.

The league was chartered in response to concerns about postwar colonial divisions of territory as well as strong opposition to the emergence of a Jewish state on Palestinian territory.

A League of Their Own According to its charter, the founding members of the Arab League—Egypt, Iraq, Lebanon, Saudi Arabia, Syria, Transjordan, and Yemen—agreed to seek “close cooperation” on matters of economics, communication, culture, nationality, social welfare, and health.

They renounced violence as a means to settle settlement conflicts between members and empowered league offices to mediate in such disputes, as well as in conflicts involving nonmembers.

Signatories agreed to collaborate in military affairs; this accord was strengthened with a 1950 pact committing members to treat acts of aggression against any member state as an act against all.

The charter established the Arab League headquarters in Cairo, created a permanent General Secretariat, and scheduled sessions to meet biannually, or at the request of two members in extraordinary circumstances. A formal commitment to international human rights law entered league conventions in 2004—it was ratified in 2008—when some members adopted the Arab Charter on Human Rights.

The concept of an integrated Arab polity based on shared culture and historical experience, which is at the heart of the Arab.