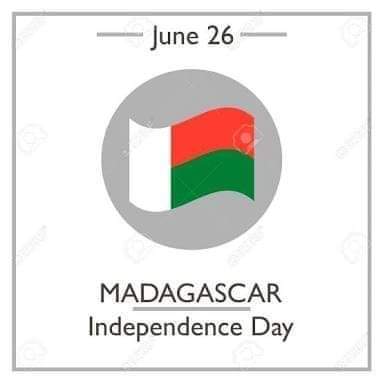 It is the National Day of Madagascar and marks the country’s independence from France in 1960.

In the early 19th century, Madagascar was united and ruled as the Kingdom of Madagascar. Seen as a key strategic location by both France and Britain, France invaded Madagascar in 1883, eventually removing the monarchy and quashing resistance and imposing colonial rule in 1897.

During the second world war, the Vichy government of France unsuccessfully fought the British for the control of Madagascar. The actions of the French galvanised the growing call for independence, leading to the Malagasy Uprising of 1947. (commemorated on Martyrs’ Day on March 29th)

Though the uprising was subdued by the French, it forced the French to establish reformed institutions in 1956 and paved the way for Madagascar to move towards independence without the need for more violent insurrection.

The Malagasy Republic was proclaimed on October 14th 1958, as an autonomous state within the French Community. Soon after a constitution was adopted in 1959 and full independence as the Republic of Madagascar was gained on June 26th 1960.

Madagascar is the world’s fourth-largest island behind Greenland, New Guinea and Borneo. It has been an island for about 88 million years, since it split from India after the supercontinent Gondwana had broken up.

Every year Independence is celebrated with lots of food, drinking and dancing with fireworks and firecrackers a common sight and sound. It is a patriotic time with the flag of Madagascar flown from houses and balconies across the towns and villages on the island.

On June 26th, crowds gather at Mahamasina Stadium, in the capital Antananarivo to watch a military parade which is usually followed by a concert. The concert will include a presentation of ‘Hiragasy’, traditional music Malagasy; when singers wear traditional attire to present folk tales using songs, poetry and dance.