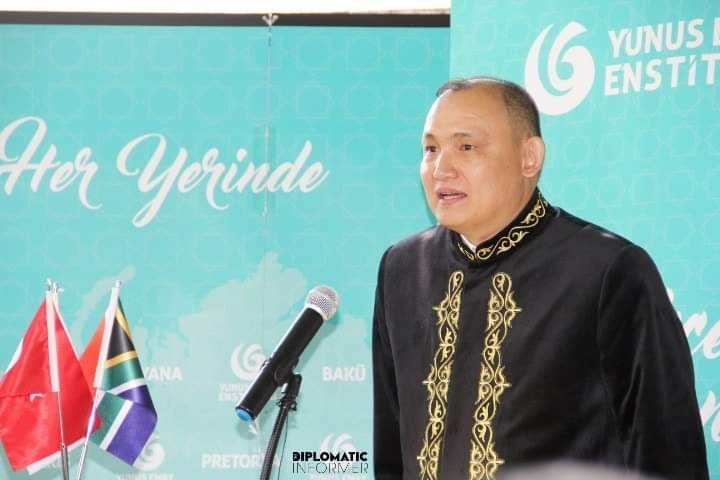 The South African Embassy was first established in December 2003 in Almaty; but in 2008, the Embassy relocated to Astana; there after it relocated to Nur-Sultan in 2019.

On Thursday, 3 March 2022, Kazakhstan Embassy in Pretoria hosted the Award Ceremony of the Essay Competition for South African schools
dedicated to the legacy of Great Sufi Leader and Ahmed Yassawi, in celebration of the up coming 30th Anniversary of Diplomatic Relations between Kazakhstan and South Africa on 5th March 2022.

The Government of the Republic of South Africa was represented by the Guest of Honour Ms Sindiswa Mququ, Acting DDG of the Department of International Relations and Cooperation (DIRCO), and in her remarks Ms Sindiswa Mququ conveyed congratulatory message on behalf of the South African Government and noted the strong ties with Kazakhstan. In his opening remarks His Excellency Ambassador Kanat Tumysh said on the 5th of March, we will celebrate the 30th Anniversary of diplomatic relations between Kazakhstan and South Africa; it will be our Pearl Jubilee.

Based on the modern history of our two states, that very date, when our diplomatic relations were officially established, is the beginning of the Kazakh-South African cooperation.

A milestone event in the development of bilateral relations was the opening of the Embassy of South Africa to the Republic of Kazakhstan in December 2003.

Our countries have much in common. Both South Africa and Kazakhstan boast diverse populations with different ethnicities, religions, and traditions – a diversity that strengthens and enriches our countries.

I have personally experienced the depth (брэтс) of South Africa’s history and culture.

Likewise, I also always try to utilize opportunities to share the Kazakh culture with the people of South Africa.

In this vein, it is important also to promote cooperation in the mining industry, engineering, healthcare and agriculture, in particular, in the exchange of advanced technologies.

We have already agreed to strengthen economic partnership and have pledged to conclude the Enhanced Trade and Economic Cooperatio Agreement that seeks to give preference to Kazakh and South African companies to win goods and services contracts in both countries. In future, we will launch a bi national Business Forum as a vehicle through which our two countries can promote and advance economic and development goals that are beneficial to both countries. Our business leaders work together to create jobs and grow our economies. Both countries strive to build a genuinely attractive business environment for foreign companies.

We believe that together with South Africa we will work closely towards catalysing private financing to develop our economies.

We also share common values and a strong commitment to contribute jointly to the principles of multilateralism and UN pillars, having worked in particular, as non-permanent members of the UN Security Council. For instance, we work hand-in-hand to make Africa, Middle East and Asia inhospitable terrains for extremists and terrorists, freeing our planet from nuclear weapons and nuclear tests, advancing effective and sustainable primary healthcare for all, promoting empowerment of women and in many other spheres.

Our state also proposed the creation of a new geopolitical reality based on the establishment of direct dialogue among the United States, Russia,
China and the EU. Many of the troubles of the contemporary world lie in the lack of trust and dialogue.

We believe that such a reputable state as South Africa, being a full member of NAM and BRICS, as well as being an authoritative African leader, will be instrumental in the implementation of this agenda.

I look forward to being constantly in touch with the Government and people of South Africa in order to continue our tradition of partnership. For 30 years, since we established our diplomatic relations, these ties have grown steadily and smoothly. Even during some difficult times for our planet, we have worked together and accomplished much in pursuit of shared goals, most particularly to build a more just, more prosperous and safer world. This work rests on our shared commitment to maintain the peace and security, ensure sustainable development, as well as to promote humanitarianism.

As the relationship between our countries grows and develops, our shared values ensure that we will remain close said H.E. Ambassador Kanat Tumysh.

This year’s winners of the Essay Competition were: