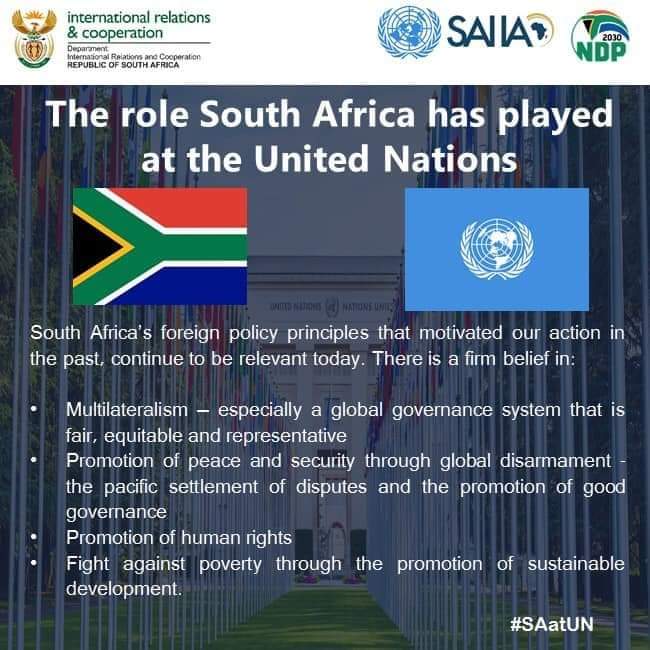 In her opening remarks Minister Pandor said for South Africa, the United Nations will always have special meaning. – “The centrality of the United Nations to South Africa’s foreign engagement is in part based on a strong belief in collective and equitable global governance, but also because of the organisation’s role in the fight against apartheid.”

Minister added that through the many decades leading up to 1994, the UN took many important steps that assisted in the international struggle against apartheid.

“The UN became the arena where the morality and legality of the system of Apartheid was questioned.”

Minister Pandor recalled that as early as June 1946, the issue of South Africa’s discrimination policies was proposed by India as an agenda item in the second session of the UN General Assembly. This was despite the fact that SA was one of the founding members of the UN.

COVID-19 has reminded us why multilateralism is important. “We have seen that as with these other contemporary challenges, no country acting alone can successfully deal with them”

The pandemic has set back progress on the achievement of the African Continent’s Agenda 2063 and the UN’s Sustainable Development Goals.

As the 76th Session of the UN General Assembly draws nearer, SA is looking forward to the the high level meeting to mark the 20th anniversary of the adoption of the Durban Declaration and Programme of Action (DDPA) at the World Conference against Racism, held in Durban, in 2001.

“The DDPA remains the international community’s blueprint for action to fight racism both historically and in the present.” – Minister Naledi Pandor

South Africa has been privileged to serve thrice in the UN Security Council as a non-permanent member and has actively promoted adherence to the mandated role of the UNSC.

Min. Pandor pointed out that South Africa has continually resisted attempts to convert the UN into a body that advances the interests of the more powerful permanent members. South Africa continues to place human rights and freedom at the forefront of its global agenda.

South Africa has consistently argued for reform of the UNSC.