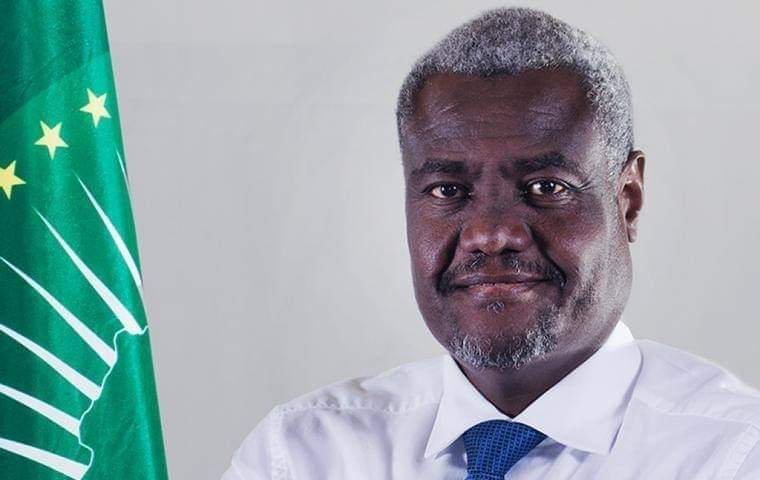 The Assembly of Heads of State and Government of the African Union has re-elected Moussa Faki Mahamat from the Republic of Chad, as the African Union Commission Chairperson for another four year term from 2021-2024.
The election took place on 6 February 2021 during the ongoing 34thOrdinary Session of the Assembly which is being held virtually due to the containment measures instituted as a result of the ongoing Covid-19 pandemic.

In line with the Institutional Reforms of the African Union and the goal to improve the efficacy of programme implementation, the portfolios of Commissioners were reduced from eight to six

The Executive Council on 6th February 2021 elected the following Commissioners

Elections for the posts of Commissioner Health, Humanitarian Affairs and Social Development and Commissioner Education, Science, Technology and Innovation were postponed to the next meeting of the Executive Council. The incumbent Commissioners Ms. Amira Elfadil Mohammed (Sudan) and Prof. Sarah Agbor (Cameroon) respectively, will continue to serve in their current positions until the elections are conducted.

The elections demonstrate progress on the implementation of the Institutional Reforms of the Union adopted in 2018 directing that from 2021, the leadership of the AU Commission shall be composed of eight members – the Chairperson, Deputy Chairperson and six Commissioners from the previous ten member Commission. The reforms also included decisions to enhance the transparency and meritocracy of the Leadership selection process, and a Panel of Eminent Africans were tasked with the pre-Selection process of the senior leadership positions of the African Union Commission.
The selection principles were based on equitable regional representation, gender parity, predictable rotation, attracting and retaining Africa’s top talent, accountable and effective leadership and management, and transparent and merit-based selection.