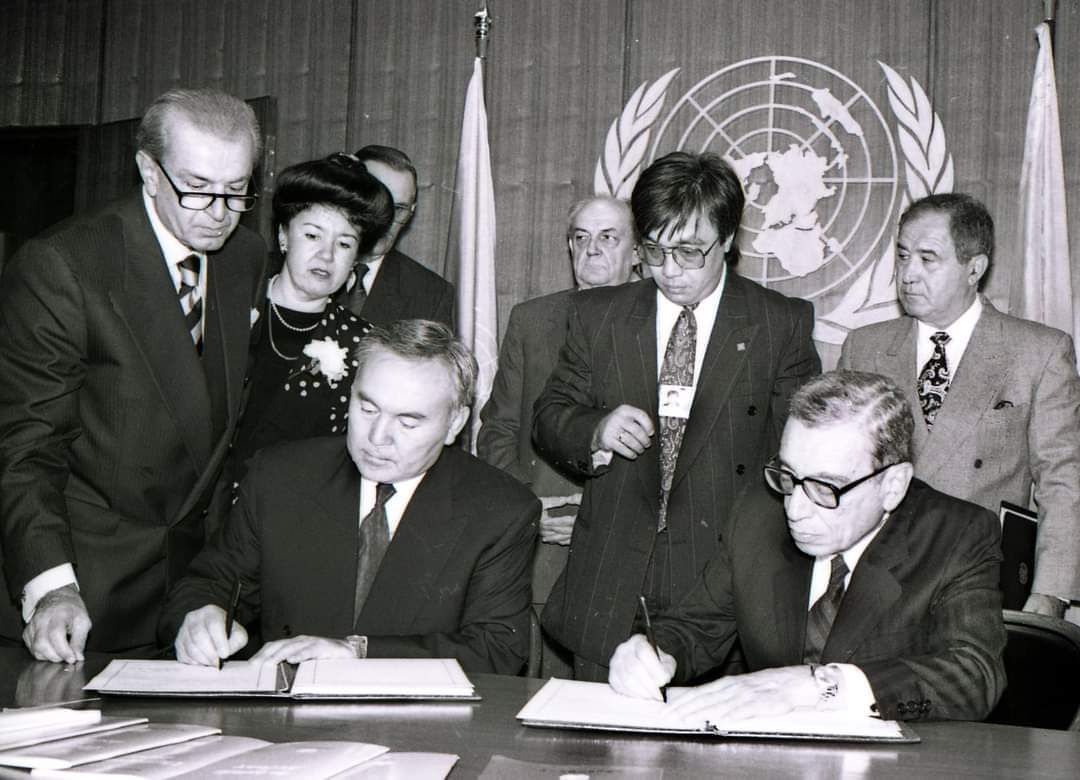 ON THIS DAY IN 1992 KAZAKHSTAN JOINED THE UNITED NATIONS

Particular attention is given to strengthening cooperation under the auspices of the Organization in the field of disarmament, economy, ecology, social and sustainable development, peacekeeping, development of international law, respect for human rights, gender equality, counter-terrorism, organized crime and drug trafficking.

During its membership in the UN, in different years, Kazakhstan has put forward the following initiatives that have been or are being implemented.

Convocation of the Conference on Interaction and Confidence Building measures in Central Asia (CICA). Kazakhstan’s President Nursultan Nazarbayev first proposed CICA on October 5, 1992 during the 47th session of the UN General Assembly.[18][19]United Nations Special Program for the Economies of Central Asia (SPECA);Rehabilitation of the ecological disaster zones of the Aral Sea and Semipalatinsk;The Green Bridge Partnership Program, which was supported at two Conferences of the UN Regional Commissions (ESCAP and UNECE) and the United Nations Conference on Sustainable Development Rio + 20;Development of the Global Energy and Environmental Strategy, the main components of which are reflected in the final document of the United Nations Conference on Sustainable Development Announcement of August 29 as the International Day Against Nuclear Tests; Kazakhstan presented The ATOM Project at the United Nations on September 4, 2013, a global campaign to end testing of nuclear weapons.

Announcement of 2010 and 2013-2022 as the International Year and the International Decade for the Rapprochement of Cultures;In order to implement the initiatives of the President of the Republic of Kazakhstan N. Nazarbayev to combat terrorism and counter violent extremism with the UN counter-terrorism units and with member states, work is being carried out to incorporate the main postulates of the initiative in the activities of the Organization and their reflection in UN documents.Manifesto of the Head of State “The World. XXI Century “was sent to the UN leadership and distributed in six official languages among all UN member states with registration numbers A / 70/818 as a document of the General Assembly and S / 2016/317 as a document of the Security Council.
Initiatives to convene a high-level UN Conference on the reaffirmation of the principles of international law, the creation of the United Nations Center for the Development of Green Technologies and Investment Projects under the auspices of the United Nations in Astana, the annual transfer of one percent of the defense budget of the UN member states to the UN Special Fund for Financing the Goals of Sustainable Development, reform of ECOSOC to the Council for Global Development.Initiative for the establishment of the UN Regional Hub for Central Asia and Afghanistan in Almaty.
The UN General Assembly adopted the Universal Declaration on the Achievement of a Nuclear Weapon-Free World during its 73rd session. The Universal Declaration was introduced by Kazakhstan. The UN and Kazakhstan have a formal Partnership Framework For Development to span between 2016 and 2020.

Nuclear Disarmament & Nonproliferation, the cornerstone of Kazakhstan’s foreign policy and top policy priority at the United Nations is to rid the world of nuclear weapons and their testing. Soon after national independence and UN membership, President Nazarbayev declared intentions to decommission more than 1400 inherited nuclear weapons from the former Soviet Union. While serving as Security Council president in January 2018, Kazakh Ambassador Umarov prioritized a high-level briefing on nonproliferation and confidence building measures.