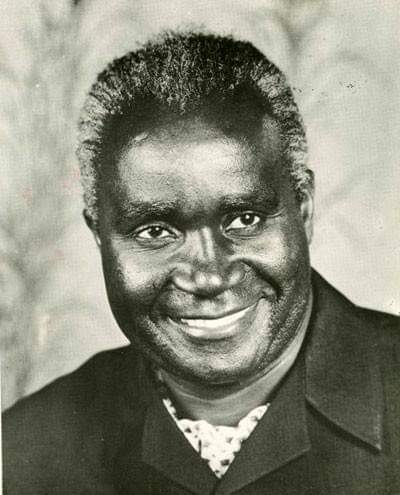 The Founding Father of the Zambian Nation and First Republican President Dr. Kenneth David Kaunda, was born on 28 April 1924, Lubwa, near Chinsali, Northern Rhodesia [now Zambia]), Dr. Kaunda a politician, led Zambia to independence in 1964 and served as that country’s president until 1991.

Kaunda’s father, who was from Nyasaland (now Malawi), was a schoolteacher; his mother, also a teacher, was the first African woman to teach in colonial Zambia. Both taught among the Bemba ethnic group in northern Zambia, where young Kaunda received his early education, completing secondary school in the early 1940s. Like the majority of Africans in colonial Zambia who achieved some measure of middle-class status, he also began to teach, first in colonial Zambia and in the middle 1940s in Tanganyika (now Tanzania).

Kaunda returned to Zambia in 1949. In that year he became interpreter and adviser on African affairs to Sir Stewart Gore-Browne, a liberal white settler and a member of the Northern Rhodesian Legislative Council. Kaunda acquired knowledge of the colonial government as well as political skills, both of which served him well when later that year he joined the African National Congress (ANC), the first major anticolonial organization in Northern Rhodesia. In the early 1950s Kaunda became the ANC’s secretary-general, functioning as its chief organizing officer, a role that brought him into close contact with the movement’s rank and file. Thus, when the leadership of the ANC clashed over strategy in 1958–59, Kaunda carried a major part of the ANC operating structure into a new organization, the Zambia African National Congress.

Kaunda became president of the new organization and skillfully used it to forge a militant policy against the British plan for a federation of the three central African colonies—Southern Rhodesia, Northern Rhodesia, and Nyasaland. African leaders opposed and feared any such federation because it would tend to place ultimate power in the hands of a white minority of settlers. Kaunda employed the Zambia congress as an instrument for executing what he called “positive nonviolent action,” a form of civil disobedience against the federation policy. His campaign had two major results: first, the British government modified the federation policy and eventually agreed to discard it; second, the imprisonment of Kaunda and other militant leaders elevated them to the status of national heroes in the eyes of the people. Thus, from 1960 on, the nationwide support of Zambia’s independence movement was secured, as was too the dominant status of Kenneth Kaunda in that movement.

Kaunda was released from prison by the colonial government on January 8, 1960. At the end of that month he was elected president of the United National Independence Party (UNIP), which had been formed in October 1959 by Mainza Chona, a militant nationalist who was disenchanted with the older ANC. The UNIP enjoyed spectacular growth, claiming 300,000 members by June 1960. In December 1960 the British colonial authorities invited Kaunda and several other UNIP leaders to participate in discussions on the status of the three colonies at a conference in London. Early in the following year the British government announced that formal decolonization of Zambia would commence.

The first major elections leading to final decolonization were held in October 1962. The constitutional proposals upon which the election was based provided the European settlers in Northern Rhodesia with a disproportionate share of the votes. Yet the two major African parties—the UNIP and ANC—gained a majority of the votes.