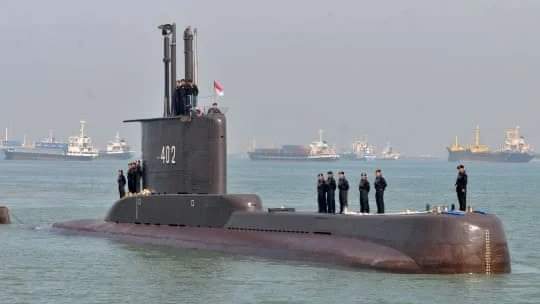 The missing Indonesian Navy KRI Nanggala 402 submarine that has been missing since Wednesday has been found in several pieces on the Bali sea bed, the Associated Press reported. All 53 crew members on board died when the sub broke open, an Indonesian military official said Sunday.
The sub lost contact at a depth of 2,790 feet, far beyond the vessel’s maximum depth capabilities, on Wednesday. Officials say that at that depth, the water pressure would have likely crushed the hull. Officials on Sunday said the sub was found in at least three pieces with the hull showing cracks. On Saturday, several items, including a prayer rug and life jackets, in addition to a torpedo component were located. “Based on the evidence, it can be stated that the KRI Nanggala has sunk and all of its crew have died,” military chief Marshal Hadi Tjahjanto told reporters Sunday. “The KRI Nanggala is divided into three parts, the hull of the ship, the stern of the ship, and the main parts are all separated, with the main part found cracked.”