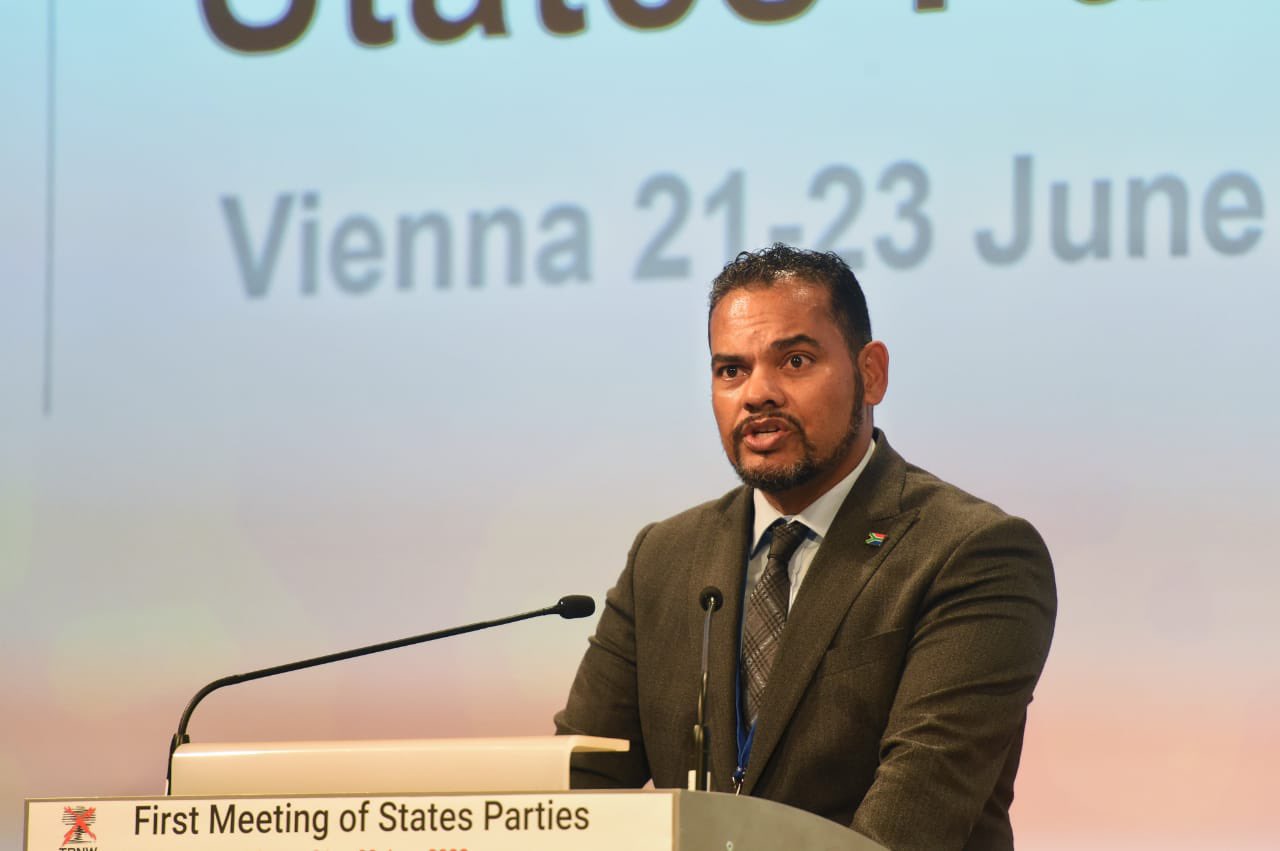 Thank you, Mr President, for the opportunity to address this august gathering. It has indeed been a long journey and now we are finally here, working on the implementation of this vital Treaty.

South Africa has been at the forefront of nuclear disarmament efforts for decades. The democratic transformation process in my country fundamentally altered the role of apartheid South Africa from being a threat to international peace and security, to a democratic State which is a principled and responsible actor in terms of the maintenance international peace and security.

This approach also forms the basis of our engagement in disarmament diplomacy. Since its inauguration in May 1994, the democratic Government South African committed itself to a policy of disarmament and non-proliferation which covers all weapons of mass destruction. This policy forms an integral part of South Africa’s commitment to democracy, human rights, sustainable development, social justice and environmental protection, which is reflected in our humanitarian approach, inter alia, to disarmament.

South Africa’s commitment to disarmament is based on our belief that international peace and security cannot be divorced from development.

Global security cannot be achieved when enormous financial and other resources are still being diverted towards the acquisition of more and more destructive capabilities, while more and more people around the world continue to suffer from hunger and deprivation. Our ultimate goal is a world free of nuclear weapons and the Treaty on the Prohibition of Nuclear Weapons is an important addition to the disarmament and non-proliferation architecture, that takes us closer to that goal.

Twenty-four years ago in 1998, President Mandela in his last address to the United Nations General Assembly pertinently noted that, “We must ask the question, which might sound naive to those who have elaborated sophisticated arguments to justify their refusal to eliminate these terrible and terrifying weapons of mass destruction – why do they need them anyway!”

South Africa’s own experience has shown that neither the possession, nor the pursuit of nuclear weapons can enhance international peace and security. The continued retention of nuclear weapons on the basis of the perceived security interests of some States comes at the expense of the rest of humanity.

While most of the nuclear-possessing States justify their continuing possession of those weapons on the grounds that they purportedly guarantee their security, it must be reiterated that we, as non-nuclear-weapon States have the conviction that their mere existence constitutes a threat to our national security and to humanity as a whole.

As we gather here for this First Meeting of States Parties, we have the opportunity to send a strong and lasting signal of a progressive march forward in humanity’s endeavour to rid the world of nuclear weapons. This should find expression in a political declaration that addresses all nuclear weapon-possessing States and provides a united response against this existential threat to humanity.

These considerations are today a fundamental and global concern that should be at the core of our deliberations, actions and decisions as we work on the implementation of the TPNW.

We must recognize that this Treaty is the democratic wish of the overwhelming majority of UN Member States and the people of the world. No longer should the world’s people’s be held hostage to the unspeakable terror of these weapons.

The TPNW’s intention is to stigmatize and delegitimize nuclear weapons based on the adverse and indefensible humanitarian consequences of their use. One of the greatest achievements of the TPNW is its filling of the legal gap on the prohibition of nuclear weapons and we as States Parties should ensure that the work that we carry out this week, as well as during the intersessional process going forward, continue to strengthen this international norm and advance this imperative.

We appreciate Austria hosting the virtual preparatory process and this first meeting of States Parties here in Vienna. In keeping with the inclusivity of the Treaty and its universalisation, we look forward to future meetings of the TPNW being held at the United Nations in New York, where there is the broadest representation of UN member states, especially developing states, who were instrumental in the adoption of the Treaty.

While we recognize the sovereign right of each State to decide whether or not it would ratify treaties that seek to establish higher international norms, we regret any attempts to undermine this new Treaty and in particular what it endeavours to achieve.

I have to emphasise that the TPNW complements other international instruments by contributing to fulfilling the nuclear disarmament obligations under the Nuclear Non-Proliferation Treaty (NPT), the objectives of the Comprehensive Nuclear Test-Ban Treaty (CTBT) as well as the various nuclear weapon free zone treaties, such as the Pelindaba Treaty that already banned nuclear weapons in Africa.

It must be stressed that the TPNW is complementary to these instruments and not an alternative. It will not replace the obligations and commitments that States have already made under the NPT and other instruments.

As we move towards the Tenth NPT RevCon in August 2022, we have to reiterate serious concern about the apparent lack of urgency and seriousness with which the solemn undertakings, particularly in respect to nuclear disarmament, continue to be approached.

Still more concerning are attempts to justify the retention of nuclear weapons under the pretext of their security benefits. On-going modernisation programmes, including in relation to delivery systems, increases in stockpiles and threats both implicit and explicit make it clear that some States still wish to indefinitely retain these instruments of destruction, contrary to their legal obligations and political commitments.

TPNW States Parties’ focus on the implementation of Article 6 of the NPT gives impetus to nuclear disarmament. This complementarity is essential in the face of previous nuclear disarmament obligations and commitments, that remain unfulfilled, and which puts at risk the grand bargain and indefinite extension of the NPT.

Most of the significant events related to nuclear weapons that have taken place over the last few years, both globally and regionally, highlight that nuclear deterrence does not preserve peace.

South Africa calls on policymakers in States under the extended nuclear security guarantee to shift their policy toward nuclear weapon elimination and free themselves from this notion of nuclear deterrence.

All of us here today are driven by a sense of responsibility and urgency and have made up our minds. We are convinced that the current security environment allows no room for procrastination. Humanity cannot afford to wait for the “right time” before doing away with nuclear weapons.

Despite the inclusiveness of the TPNW, States possessing nuclear weapons unfortunately decided not to participate in the various activities and discussions under the humanitarian initiative and instead endeavoured to portray this Treaty as a divisive effort.

Today, I am pleased to reiterate that the TPNW continues to remain open to all nuclear weapon possessing States and their allies, and we the States Parties continue to work on the Treaty’s implementation bearing in mind the manner in which we drafted it, where we were sensitive to their needs. We continue to anticipate what they will require when they join and include them in our actions. They have a moral duty to join and we have a moral duty to bring them in.

States gathered here today have the opportunity to act together on the implementation of this Treaty thus providing the urgency and determination to bring the era of nuclear weapons to an end.

We have a shared responsibility to protect future generations. Let us work together and let’s display our courage, in a sustained commitment and concerted effort to rid this planet of these horrific weapons.