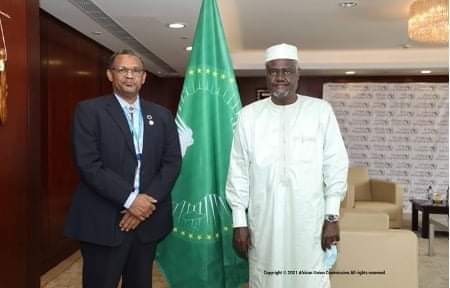 The Chairperson welcomed the new envoys and wished them a successful tour of duty in Ethiopia and to the African Union and restated the African’ Union’s strong commitment to multilateralism.

During his discussion with Ambassador Islam, the AUC Chairperson commended Bangladesh on the progress the country has made towards its development and noted that on matters of trade specifically as relates to textiles and agriculture there are numerous opportunities for collaboration between Bangladesh and African states who can benefit from the experience of Bangladesh. The Chairperson also recognized Bangladesh’s contribution to Africa’s peace and security agenda through their contribution of troops to various peace missions on the continent and welcomed these activities as key to endeavors to promote south-south cooperation. The Chairperson reiterated that the African Union plays a key role promoting investments on the continent by development partners creating the necessary linkages with both member states as well as private sector companies.

On his part, Ambassador Islam reiterated that Bangladesh is keen on strengthening the relationship with the African Union as a priority noting that investors are keen to participate in both continental projects championed by the AU as well as in AU member states; and looked forward to working with the African Union to increase the level of investment on the continent.

In his meeting with the Director of the WFP, Dr. Hameed Nuru, the Chairperson welcomed the collaboration with the WFP in the important role the organization plays in promoting food security in Africa. The Chairperson expressed his grave concerns at the continued issues of hunger and famine in a world where there was a bounty of resources, noting that the ability to feed oneself is one of the basics of human dignity.

While recognizing that the 3C’s of Covid, Conflict and Climate have exacerbated issues around food security, the Chairperson noted that it was important for organizations like the WFP to change their strategies to focus not only on emergency situations but enhance efforts towards increased food production and access, working with the African Union and its member states to develop agriculture so that people can be self-sufficient. The Chairperson stated that “We need to end the Cycle of dependency by developing self-sufficiency in food production by developing agriculture.” The Chairperson reinforced the AU common position of seeking African solutions for African problems and recommended better collaboration by the WFP and African states specifically the WFP sourcing food supplies that are available within the continent as well as using internal supply chains as opposed to imports from outside the continent as part of their relief efforts.

Dr. Nuru on his part acknowledged the need to strike a better balance between emergency situations and implementing longer term sustainable solutions around food security including addressing issues of peace and security as pivotal to their work on the continent. He reiterated the continued collaboration with the African Union on projects such as the School Feeding Programme and the Cost of Hunger Study as well working with the African Union on Nutrition as a focus for the continent.

The Chairperson today also bid farewell to H.E. Jassim Eid Abdellah Al-Saadi, the outgoing Charge d’affaires of the Sultanate of Oman to Ethiopia and Permanent Representative to the African Union