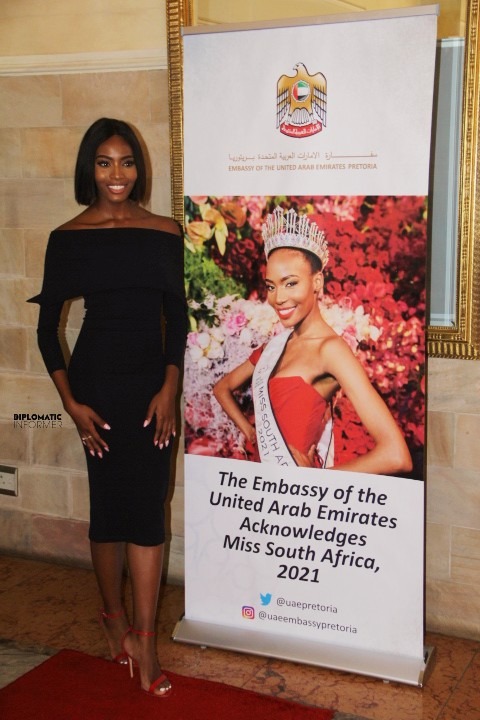 In the United Arab Emirates Women have achieved a lot in the last 50 years. Since the country’s founding in 1971, the Government has supported women’s empowerment fully.

The UAE is a dynamic, modern society where women participate meaningfully in every facet of social and political life.

In celebrating women’s empowerment and  Women’s Month, His Excellency Ambassador Mahash Saeed Alhameli of the United Arab Emirates to The Republic of South Africa and his spouse, Mrs.  Kalthoom Alhameli hosted an event in honour of Miss South Africa 2021, Lalela Mswane at the Sheraton Hotel in Pretoria.

Miss South Africa 2021, Lalela Mswane, was the second princess of the 70th Miss Universe pageant, held in Eilat, Israel.  The 24-year-old
Mswane hails from KwaSokhulu outside Richards Bay in KwaZulu-Natal. She came third while Miss India coveted the 2021 Miss Universe crown with Miss Paraguay as the first princess. Government’s decision to withdraw its support for Miss SA Lalela Mswane for her participation in the Miss Universe pageant in Israel did not deter the Miss South Africa 2021.  Lalela Mswane faced criticism,
largely from South Africa’s friendly relations with the State of Palestine and the branding of Israel as an apartheid state by South Africans.

Regardless, Lalela Mswane showed courage, strength and determination in pursuit of her dream until the end. Many felt her participation was out of step with South Africa’s Foreign
Policy. As the Department of International Relations and Cooperation, DIRCO outlines, “The formalisation of diplomatic relations gave
expression to strong and long-standing ties of friendship and mutual support between the peoples of South Africa and Palestine.” However, these matters should not impede participation in what is a global event
that presents itself as part of cultural diplomacy. In his opening remarks, His Excellency Ambassador Mahash said, “Women form a very key constituency of our daily livelihoods and their immense contribution to the country’s development agenda remains
inestimable.

UAE believe deeply in the equality and humanity of women, and passionately supports Women’s Rights.” “We celebrate all the accomplishments and sacrifices women and girls are making around the world. We are challenged to give women and girls equal
opportunity in all spheres of human advancement for them to exploit
their capabilities fully.

UAE continues to making women an integral part of our national development agenda through appointments in key leadership positions and investment in their well-being,” said Ambassador Mahash.

In her speech, Miss South Africa said she could never thank the UAE enough for its support. “When my country abandoned me, I took refuge in Dubai where all my
arrangements to participate were taken careof.

The UAE assisted me with making sure that my garments, shoes were available, and that I could finally managed to travel to Israel. I truly appreciate the support, kindness and generosity that the UAE extended to me and will forever be grateful for it,” she said.

Mswane said she was overwhelmed to have made it into the top three of the competition. “The whole experience has been beyond my wildest expectations I am deeply thankful to all the amazing people who have supported and uplifted me,” she intimated.

Miss Mswane expressed her gratitude to all the women Ambassadors/High Commissioner’s and women guests who attended the event and urged young women to choose courage over comfort during her speech. “I would like young women to
know that since the beginning of time they have had everything within them to achieve anything they wanted,”

There were petitions, threats and boycotts but she refused to listen to them all and instead went ahead to compete in the Miss Universe pageant in Israel. She noted that she would have regretted it for the rest of her life if she had not gone.  She expressed pride in making it into the top three, something that made her convictions worthwhile.

The Diplomatic Informer Magazine SA would like to congratulate Miss South Africa Lalela Mswane on finishing as the second princess at the Miss Universe pageant contest in Israel.

Lalela showed courage, strength and determination in pursuing her dream to the end. She remains a winner in our hearts.
We must all remember that the attainment of gender equality is everyone’s collective responsibility!